Semiconductors are at the heart of electronic devices and the tuning of their electronic properties is typically done via the introduction of dopants.  A conventional way of doping semiconductors is to use ion implantation. However, whilst this process is well controlled in bulk semiconductors, in nanostructures it induces an intriguing phenomenon during which the shape of the nanostructure can be modified. This ion-induced bending phenomenon (IIB) can be a detrimental side effect of doping, but conversely, might offer the possibility to readily control the shape and the orientation of the irradiated structures.

As a relatively recently observed phenomenon, many challenges remain, foremost of which is that there is still no consensus regarding the mechanisms behind IIB. Also how to precisely predict and control the bending must be achieved to utilize this technique fully.

Using the Microscopes and Ion Accelerators for Material Investigations (MIAMI) facility, performing irradiations in-situ within a transmission electron microscope provide valuable information which would otherwise be impossible to have access to, such as the changing crystalline microstructures and shape evolution during irradiation. Thus, allowing a better understanding regarding the mechanism behind IIB and the factors which dictates the behaviour of the nanowires during IIB. 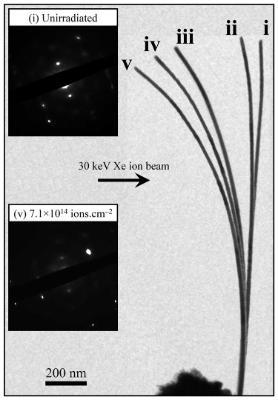 Capture of images from a live in-situ video where the images are superimposed on each other to show the evolution of the germanium nanowire under a 30 keV Xe ion beam at room temperature (RT). The projection of the ion beam onto the image plane is represented by the black arrow. The nanowire bends away from the ion beam.

Bright-field images and selected area diffraction patterns of a germanium nanowire (a) before and (b) after irradiation to a fluence of 7.3×1013 ions.cm–2 with 30 keV Xe ions at RT and (c) after annealing at 440 °C. The projection of the ion beam onto the image plane is indicated by the black arrow. After irradiation the nanowire is bent towards the ion beam, after annealing the nanowire bend even more.