Nanodiamonds and The Orgueil Meteorite

Nanodiamonds are found in nature or can be manmade. In particular, “meteoric nanodiamonds” come from rocks which have fallen to Earth having spent possibly billions of years travelling through space. One such example is the Orgueil Meteorite which crashed in southern France on the evening of 14th May 1864. The nanodiamonds discovered inside contained xenon isotopes significantly different from those normally found on Earth which indicated that it had been exposed to a supernova explosion predating the creation of the solar system.

When a star undergoes a supernova explosion, its stellar material is expelled into space at high energies and these ejected atoms can then impact on other celestial bodies. Therefore, to help piece together the history of extraterrestrial objects such as the Orgueil Meteorite, it is important to understand how they respond to bombardment by supernova ejecta.

Nanodiamonds from the Orgueil Meteorite came to the Microscopes and Ion Accelerators for Materials Investigations (MIAMI) facility at the University of Huddersfield. They were irradiated with xenon ions whilst being observed using a transmission electron microscope which is powerful enough to see individual nanodiamonds measuring just a few nanometres across. These results were compared to similar experiments using manmade nanodiamonds formed by detonating a mixture of the explosives TNT and RDX. It was discovered that the size of the nanodiamonds was a critical factor in determining their survival under irradiation and this has important implications for understanding the survival of dust in astrophysical environments as well as for the controlled processing of nanodiamonds for industrial applications. 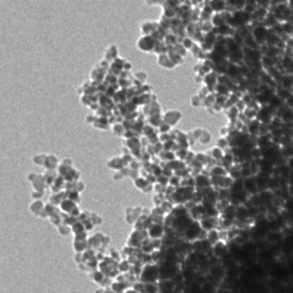 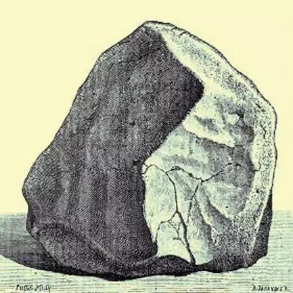 Painting of an individual fragment from the Orgueil meteorite (Credit - G.A. Daubrée - out of copyright)