Over the past century, many musicians have likened their practice to the principles of democracy. Music has been held to enact new kinds of freedom and equality for participants, and to offer a democratic symbol for other areas of social life. Despite this interest on the part of musicians, the conjunction of music and democracy has received little sustained academic attention, leaving important questions largely unexamined. How can different musical practices instantiate different ideas of democracy? What assumptions are made about democracy by ‘democratic’ musicians? Which elements of democratic musical practices are open to democratic decision-making, and which are placed beyond democratic debate? How does music contribute to the global circulation of contestable ideologies of democracy?

This project, led by Professor Robert Adlington, undertakes a comprehensive investigation of such questions, questions that remain of very real present-day importance both to creative musicians and to organisations seeking to promote music as a tool for positive social change. In seeking to address this research gap, significant weight will be given to political theorists’ preoccupation with the contested nature of the idea of democracy, and the way in which any one model of democracy brings costs as well as benefits. Adopting this perspective brings into greater relief the shortcomings as well as the strengths of any particular musical-democratic practice, and helps to explain why sharply different opinions frequently exist over whether a given musical practice is democratic or not.

The Democracy in Music project is far reaching, involving collaborators at Oxford, Anton Bruckner Private University Linz, Sydney Conservatorium, partnerships with the Transit, Darmstadt, and Rainy Days festivals, and a series of international conferences and symposia, including the Peter Le Huray keynote lecture at the Annual Conference of the Royal Musical Association.

2020 Robert Adlington, ‘Imagining democracy in music: lessons from the past’, in Darmstädter Beiträge zur Neuen Musik, 25, 26-32 [alongside other lectures on democracy and music by Noriko Manabe, Cathy Milliken and Georgina Born].

4 February 2020: Royal Birmingham Conservatoire – ‘On the undemocratic – in music, and elsewhere’ (guest lecture)

28-29 November 2019: ‘Arts and Models of Democracy in the Post-Authoritarian Iberian Peninsula’ (conference), University of Huddersfield

20-21 June 2019: ‘Music and democracy: beyond metaphors and idealization’ (study days), University of Huddersfield

2 May 2018: University of Liverpool – ‘How democratic is indeterminate music?’ (guest lecture)

24 January 2018: University of York – ‘The most democratic of composers? Elliott Carter and the idea of democracy’ (guest lecture)

12 October 2017: University of Manchester – ‘The most democratic of composers? Elliott Carter and the idea of democracy’ (guest lecture)

13 September 2017: Tenth Biennial International Conference on Music since 1900, University of Surrey – ‘The most democratic of composers? Elliott Carter and the idea of democracy’ (conference paper)

7-8 July 2017: Music and Socialism since 1917 (conference), University of Nottingham – member of programme committee and project team

7 June 2017: University of Warsaw – ‘What can democracy mean for music?’ (guest lecture)

26 October 2016: University of Cambridge – ‘What can democracy mean for music?’ (guest lecture)

28 October 2015: University of Birmingham – ‘What can democracy mean for music?’ (guest lecture)

7 September 2015: FOR CRYIN’ OUT LOUD: Music and Politics (conference), Gaudeamus Muziekweek, Utrecht – ‘What can democracy mean for music?’ (keynote lecture) 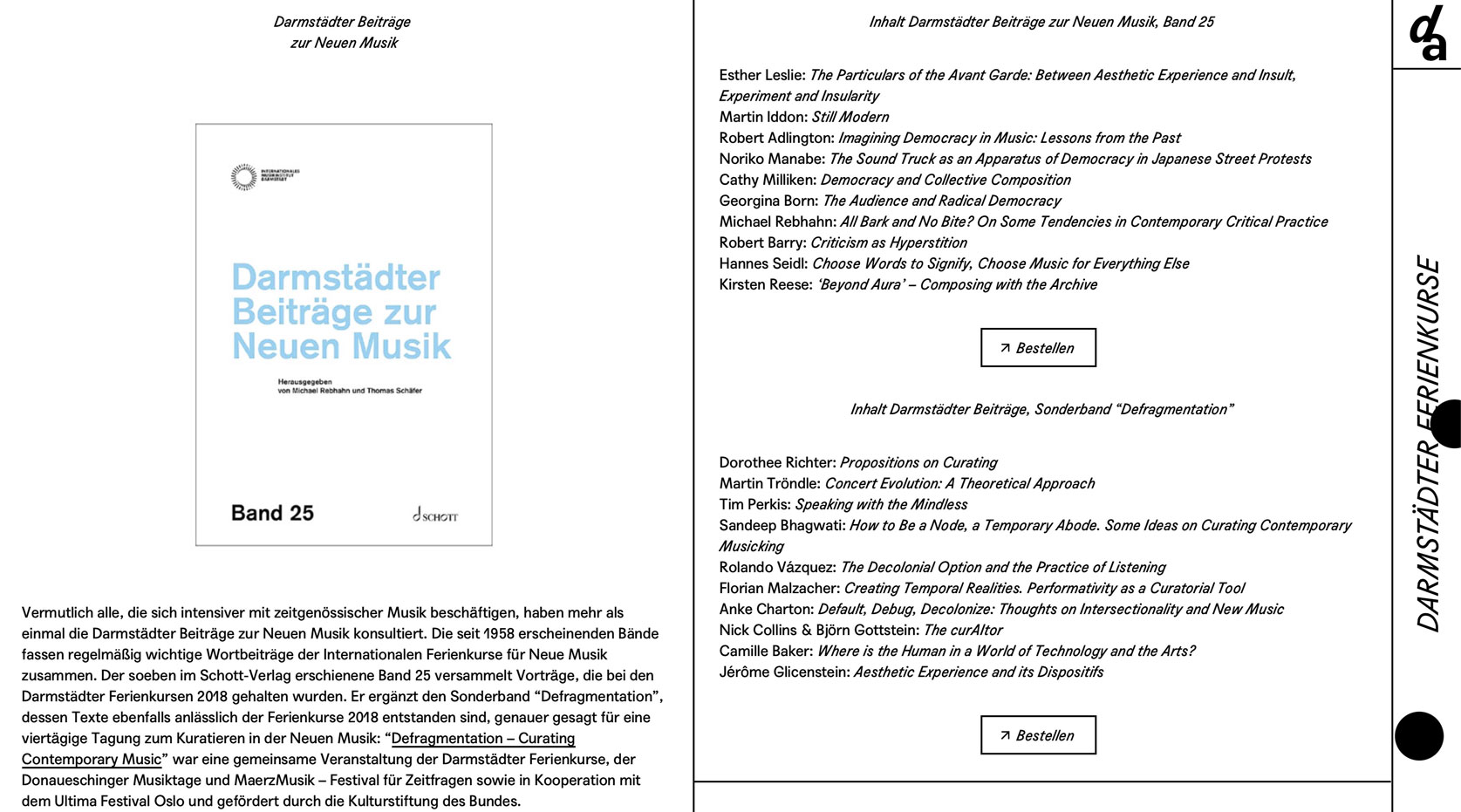 Publications including 'Finding Democracy in Music' on Routledge

Events organised by and participated in