Extended Bodies, Uncanny Beings is a partnership between CeReNeM staff and Ensemble Musikfabrik, one of the leading international ensembles for contemporary music, and one with a strong dedication to artistic innovation and experimentation. The partnership features a series of research residencies leading to new compositions, performances, and recordings. The resulting works by Prof Aaron Cassidy and Dr Mary Bellamy were premiered in Cologne in March 2020, and were recorded for the Kairos and HCR labels for publication in 2021.

Extended Bodies, Uncanny Beings extends previous projects between the ensemble and CeReNeM, including performances of Prof Liza Lim's opera Tree of Codes and her concert-length work Tongue of the Invisible, along with performances of numerous solo and ensemble works by Prof Lim and Prof Cassidy, as well as various parternships for externally funded research projects.

Residency #2: July 2019
Follow up residency undertaken by Prof. Aaron Cassidy working with members of Ensemble Musikfabrik in Cologne to develop materials and approaches to performance and notation. 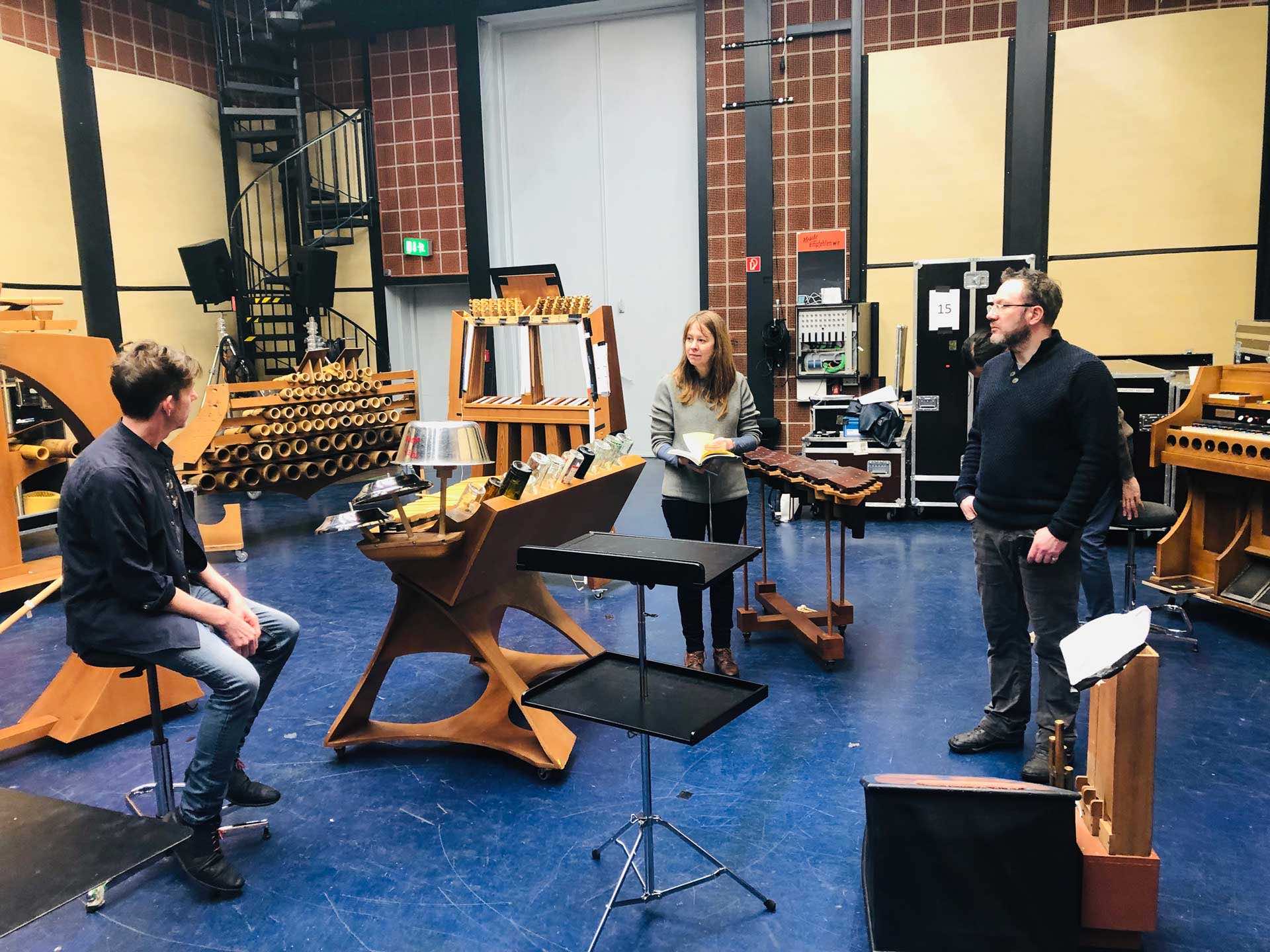 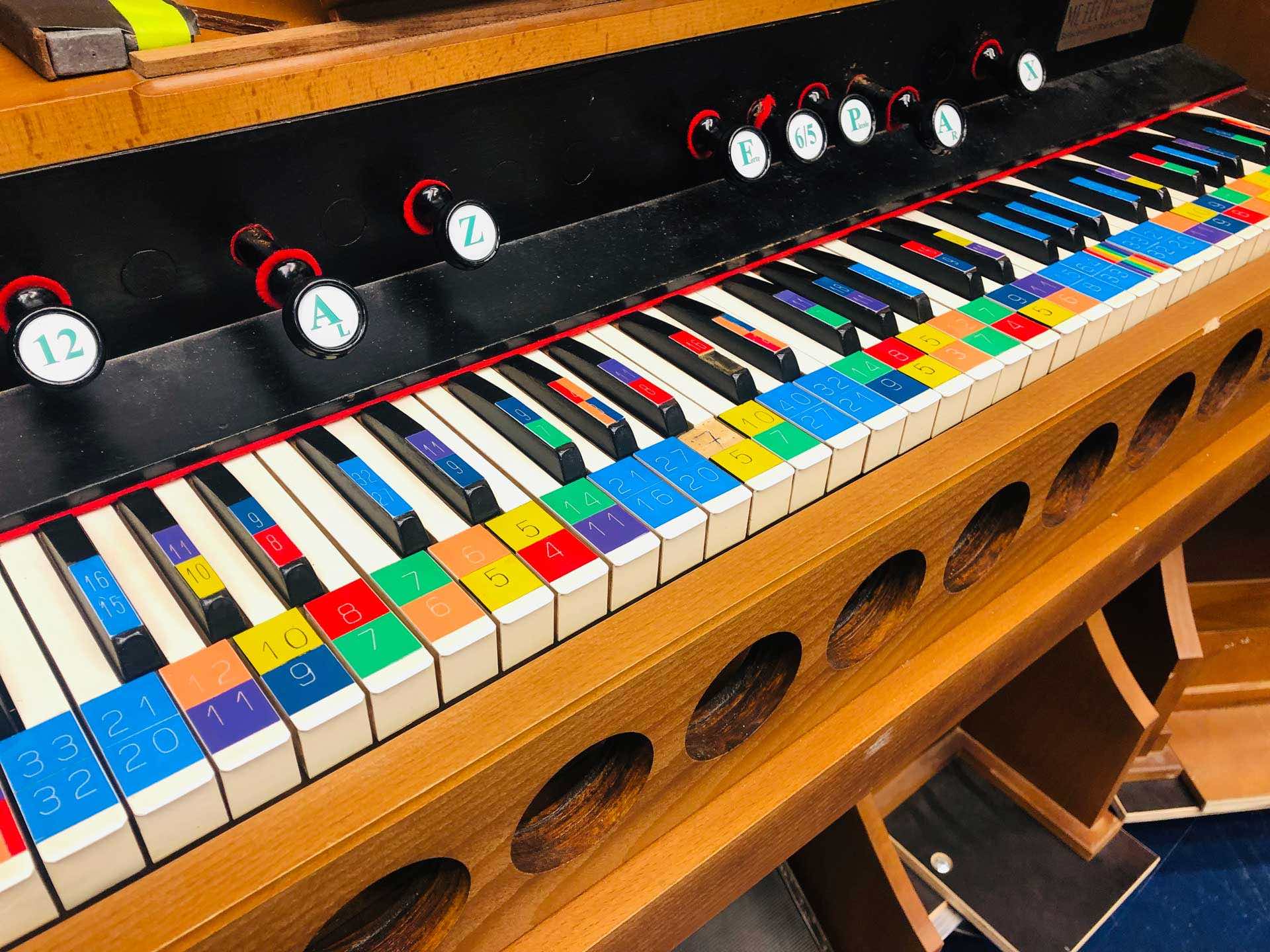 Aaron Cassidy, A way of making ghosts, Kairos Music (forthcoming 2021). With performances by ELISION, Ensemble Musikfabrik, Line Upon Line, and the JACK Quartet.

Self-portrait, 1996 is the second in a pair of quartets based on the self portraits of the painter Gerhard Richter—along with Self-Portrait, Three Times, Standing (15.3.1991–20.3.1991)—which together form the collection A way of making ghosts.

Richter’s 1996 self portrait is based on a photograph (from his sprawling Atlas collection), and I’m fascinated by the way in which the cropping and rotating of the original image completely alters the emotional state that is projected in the painting. As with so many of Richter’s more intimate portraits, the subject’s gaze is deflected, hidden, obscured. The face and its details are all just out of reach, present but not visible. What I love about the self portrait is that it is personal and vulnerable but also somehow quite distant, not least because of the blurred, smeared surface, and perhaps even more because of the strange, overlaid grid that partially obscures the image, which reveals the physical ‘surface’ of the paint on the canvas and distances it from the ‘image’ of the painting.

That this is a self-portrait is important, particularly when viewed through this layered, uncertain stacking of realities. Richter’s approach shows the self-portrait both as a reality and a fabrication, a replication and a sleight-of-hand misdirection, a jumble of truths around which of its layers is the real ‘material’ of the work. Both of these quartets explore similar issues, dancing between the representational and the abstract, between obliteration as covering and obliteration as revealing the reality of instrumental and bodily material, between intimacy and separation, between vulnerability and otherness, between layering as stacking/extending and layering as concealing/hiding. And both new pieces continue a path I’ve been exploring in my work in recent years, rethinking where ‘I’ sit in my work, and reimagining the personal, the evocative, and the expressive aspects of how and why I make pieces.

Unlike Richter’s many self portraits, here I haven’t used/re-used any existing materials, but this new quartet aims to re-examine and repurpose some of the spaces I’ve opened up over the last 20 years or so. It’s not so much a return or re-use as it is a kind of provocation to myself, a reminder that there’s unfinished business with some of what I’ve made in the past, and also an acknowledgement that there remains a gap between what I’ve made and what I wanted to have made. The piece is a ‘working through,’ a ‘trying again’, but then is also an effacing of those older materials, and that effacing is its own reality and its own ‘self’. (The Richter work is not dissimilar—there is, in fact, a slightly earlier Self-portrait 1996 using a different photograph as a starting point.)

The work is written for and dedicated to Ensemble Musikfabrik, and was supported by a generous grant to the Centre for Research in New Music (CeReNeM) from the University Research Fund at the University of Huddersfield. Many thanks to Musikfabrik’s Helen Bledsoe, Carl Rosman, Christine Chapman, and Dirk Wietheger for their invaluable assistance in the development process of many of the materials and techniques used in this work.

Mary Bellamy: Behind the transparent surface (2020)

The idea of transparency underpins many of the sonorities in this piece. Transparency: the physical property whereby light waves can pass through a boundary, such as water, glass or air, without any scattering of the light’s rays. When something is transparent we can see through it clearly to what lies behind. This simple way in which light interacts with a surface suggested many sonic parallels to me. The clear glass of the cloud chamber bowls provided a focal point, a transparent, resonant surface through which other sonic materials gradually become audible. I chose to use a small selection of Harry Partch instruments and combine these with conventional instruments, both of which at times depict the shadows and reflections of light, becoming increasingly active throughout the piece, and the transparent surface of still and sustained tones. This work is the second piece I have written inspired by artist James Turrell’s light sculptures, which explore viewer’s perceptions of light.

The Partch instruments are such a unique set of instruments, deeply connected to Partch’s music and its different tuning systems, that it was quite a challenge at first to consider how I might approach writing for them. From the outset I wanted to fully engage with these instruments, so being able to work directly with MusikFabrik was really important. The residency began with a process of listening to, and recording, individual players as they demonstrated aspects of the Partch instruments.  This was a great starting point as it immediately introduced me to these instruments from the perspective of the players. It meant I could start thinking about the piece from this very personal connection between the ensemble and the Partch instruments and through their insight into the specific qualities and timbral possibilities of these instruments.

I chose to write for a small selection of Partch instruments: Spoils of War, Harmonic Canon, Adapted Viola and Bass Marimba, and to combine these with a small selection of regular instruments: flute, bass clarinet, percussion, violin and cello. I found it particularly interesting to explore connections between the Partch instruments and the standard instruments within the ensemble and to try and find ways they might combine in terms of their sound qualities. As a result, the ensemble is divided into a number of smaller instrumental combinations, and the overall form moves gradually through these requiring the ensemble players to switch between their various instruments. The spoils of war, itself a hybrid instrument consisting of Cloud Chamber Bowls, artillery shell casings, metal ‘whang-guns’, a Pernambuco wood block and a gourd, is central to this with many of the sections in the piece based around either its resonant qualities or its more dry, percussive sounds, which are reflected and echoed in the rest of the ensemble. 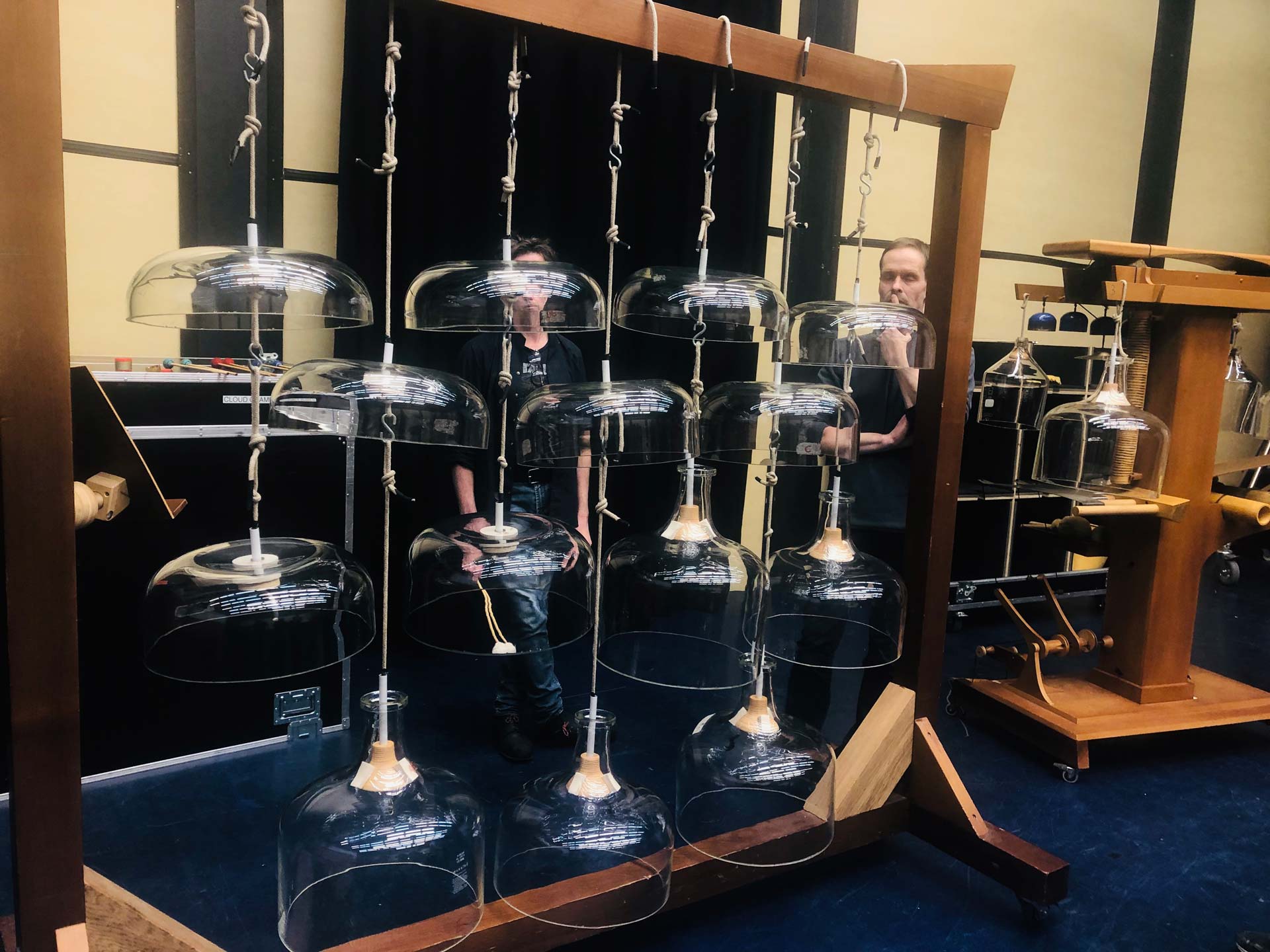 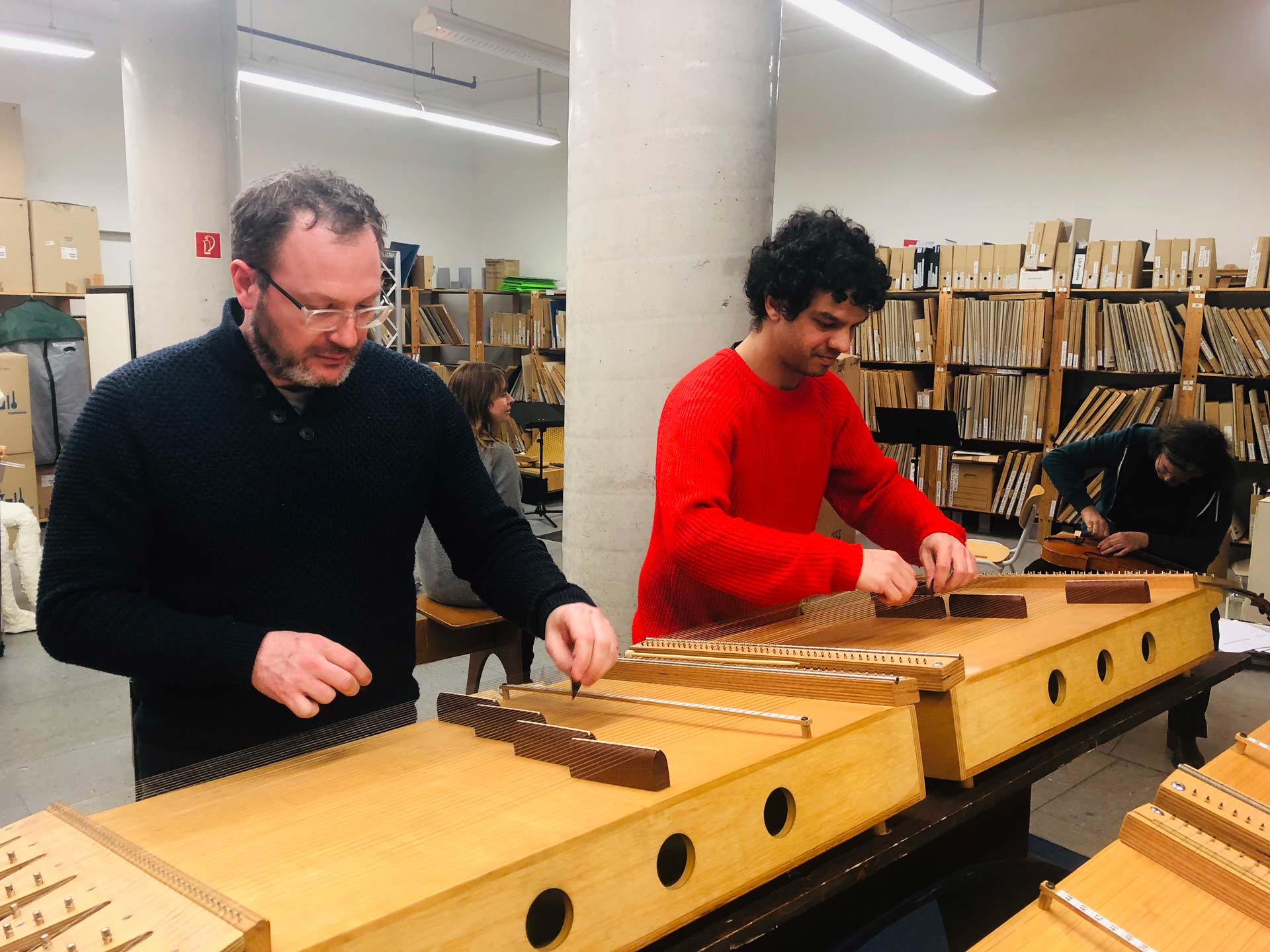