The Wet Ink Ensemble is a collective of composers, performers and improvisers dedicated to adventurous music-making. Named “The Best Classical Music Ensemble of 2018” by The New York Times, Wet Ink’s work is rooted in an ethos of innovation through collaboration, extending from the music and the unique performance practice developed in the “band” atmosphere of Wet Ink’s core octet of composer-performers, to projects with a broad range of renowned creators, from Evan Parker to George Lewis to Peter Ablinger, and committed performances of music by young and underrepresented composers, from today’s most promising emerging voices to the next generation of artists.

Smoke, Airs is the latest project in the long term, ongoing collaborative interaction between the Wet Ink Ensemble and staff at CeReNeM. Over the course of a year CeReNeM staff Pierre Alexandre Tremblay, Bryn Harrison, and Kristina Wolfe joined Wet Ink Ensemble performers Eric Wubbels, Sam Pluta, and Charmaine Lee to undertake a series of workshop residencies and concert performances.

The compositions created through this collaborative partnership included unique explorations of the perception of time, temporality, and the distinctions between analog and digital loops; virtual digital reconstructions of two historical Greek sites, a large Greco-Roman amphitheatre, as described by Vitruvius, and the Echo Stoa in the Olympic Sanctuary in Marathon; and distinctive fusing of acoustic and digital sound, including implementation of the cutting-edge software of the FluCoMa project.

This project extends several existing partnerships and bilateral exchanges, and draws on funding from several external grants and awards:

Pierre Alexandre Tremblay – CeReNeM Professor; Work commissioned with the financial support of the Canada Council for the Arts, plus additional support from the FluCoMa project (European Union’s Horizon 2020 research and innovation programme, grant #725899).

Bryn Harrison – CeReNeM Professor; previous work written for Wet Ink includes A Form in Search of Itself, premiered in NYC in June 2016

Residency #1: November–December 2018
Pierre Alexandre Tremblay and Bryn Harrison participated in a NYC-based residency for material development and experimentation with members of the Wet Ink ensemble.

Alice Teyssier offers a nuanced and personal look "under the hood” of the ambitious three-year project in her article Echoes of Echoes: Memory, Perception and Contemplations on hcmf//. Teyssier, who joined Wet Ink as guest flutist for workshops, performances at hcmf//, and the studio recording of these four new works by Charmaine Lee, P.A. Tremblay, Bryn Harrison, and Kristina Wolfe, shares musical analysis gleaned from interviews with the composers, while offering ruminations on how changing circumstances—both expected and extraordinary—affect our perception of time, musically and otherwise. 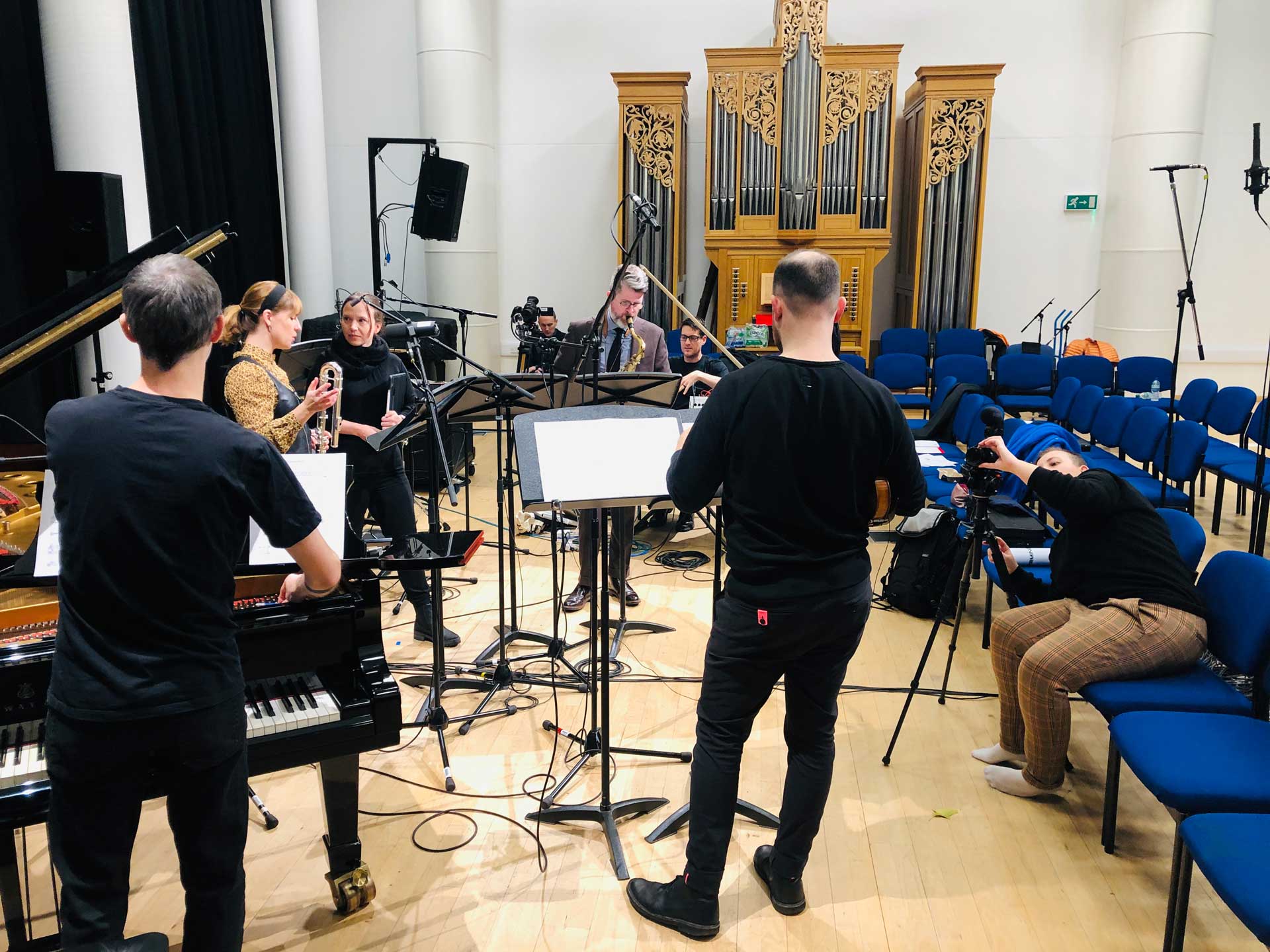 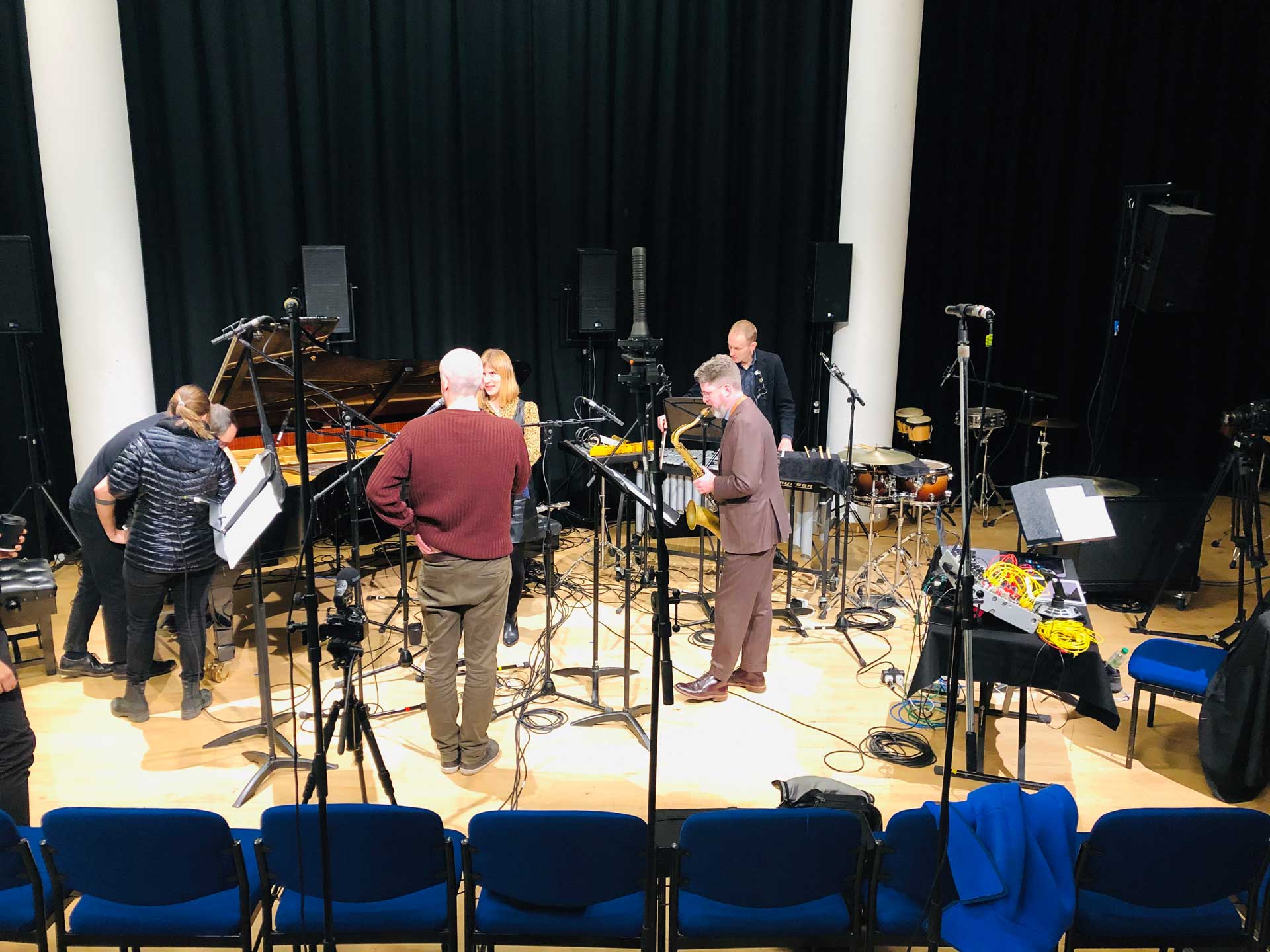 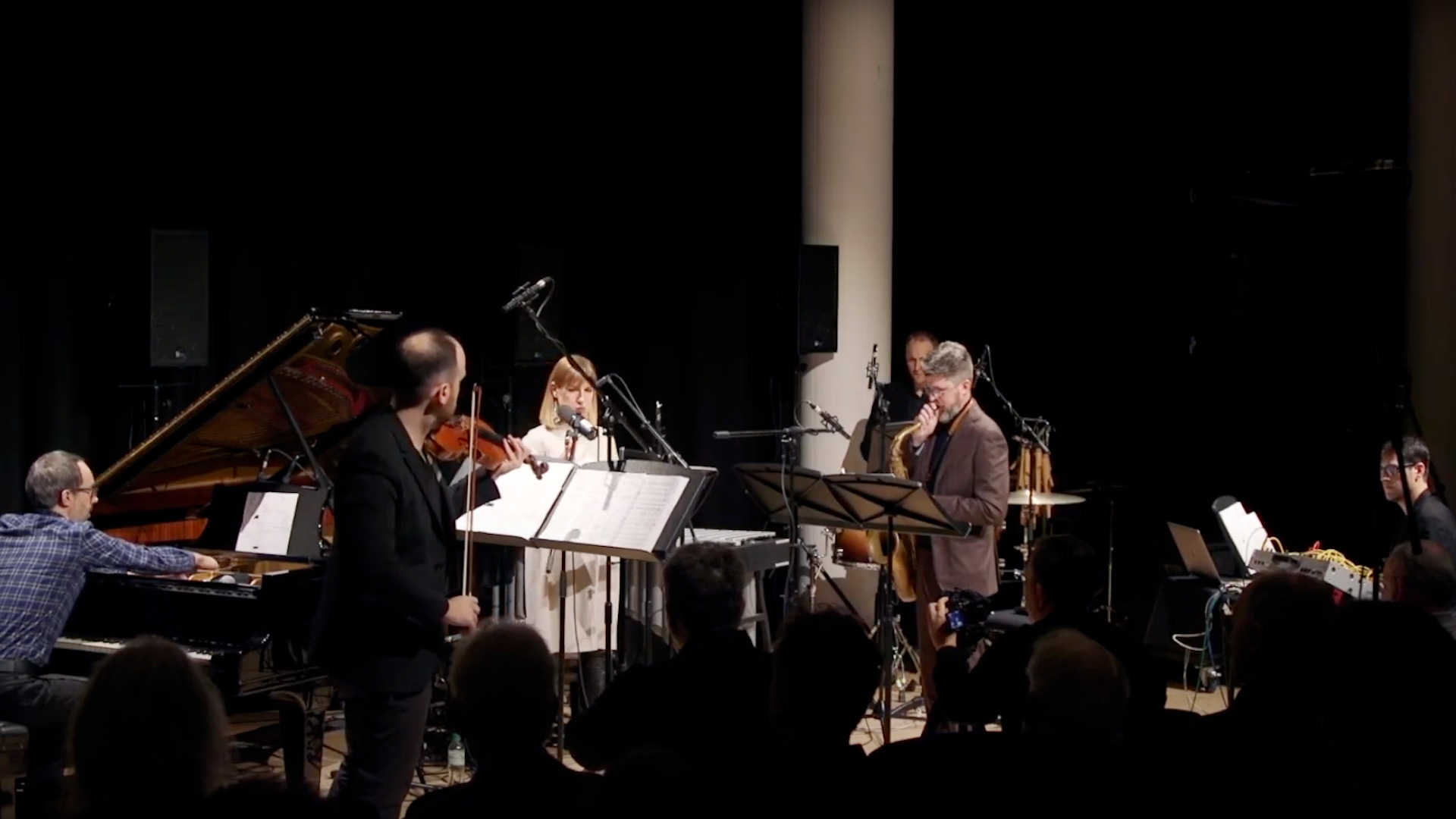 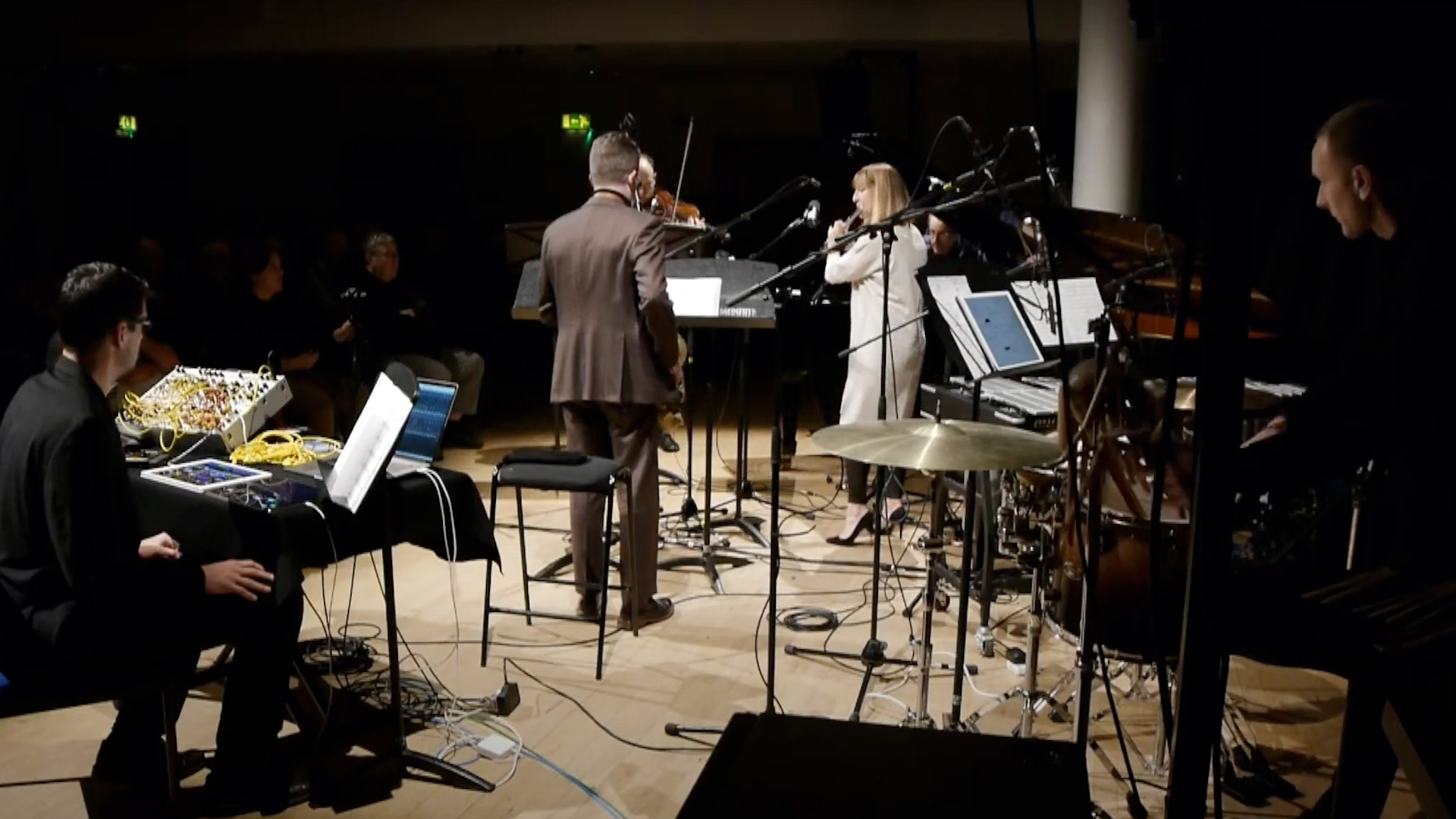 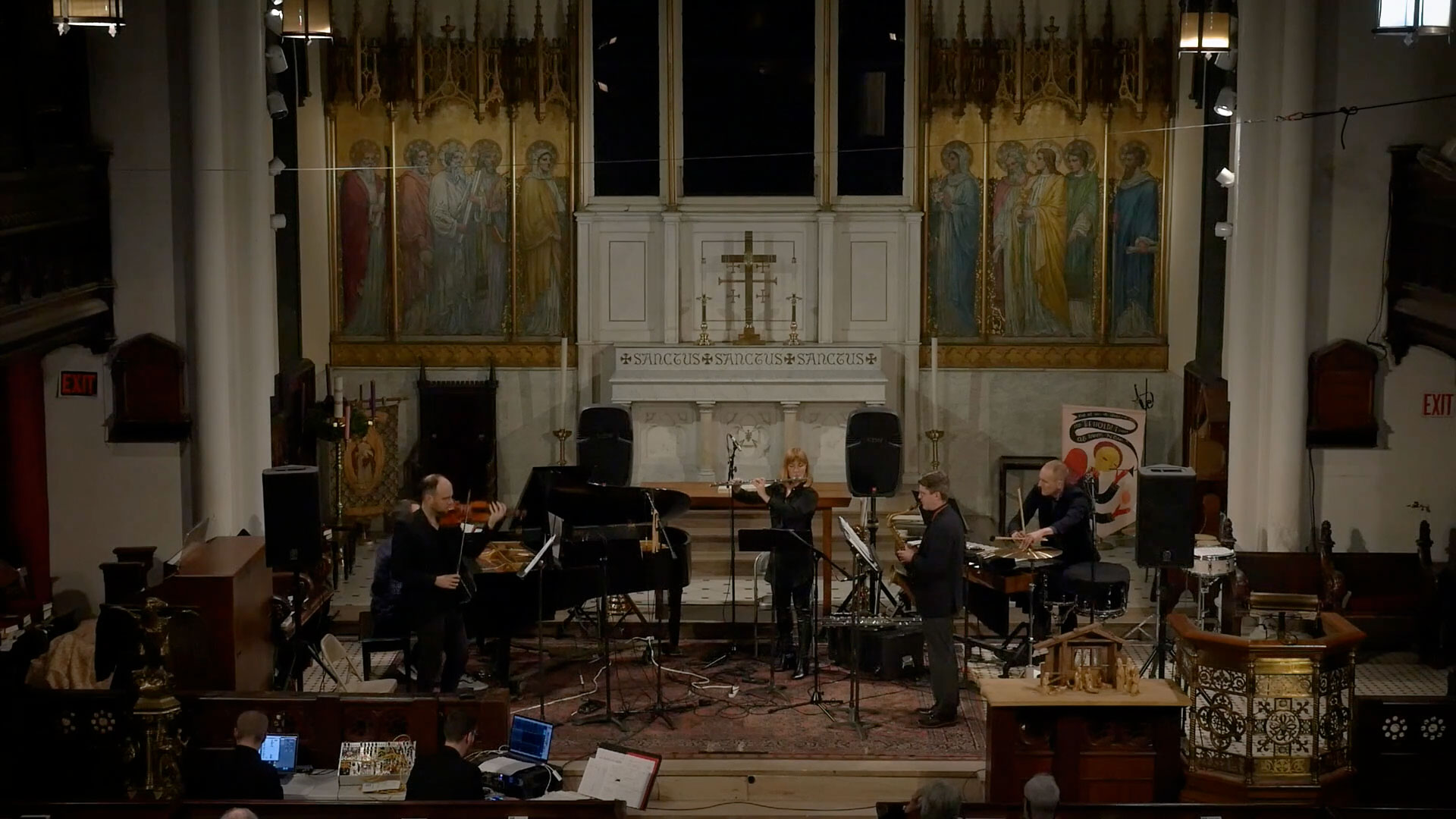 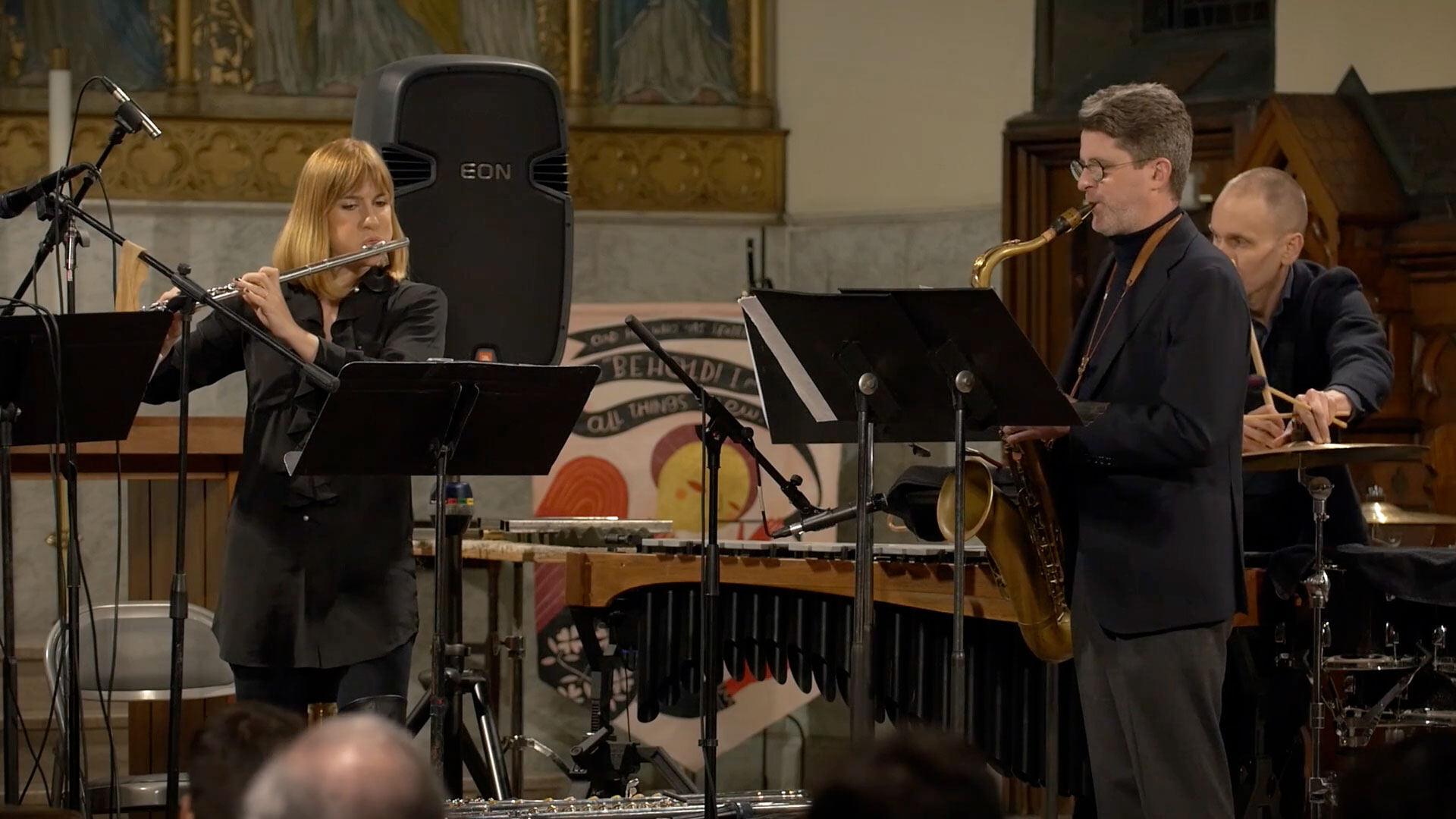 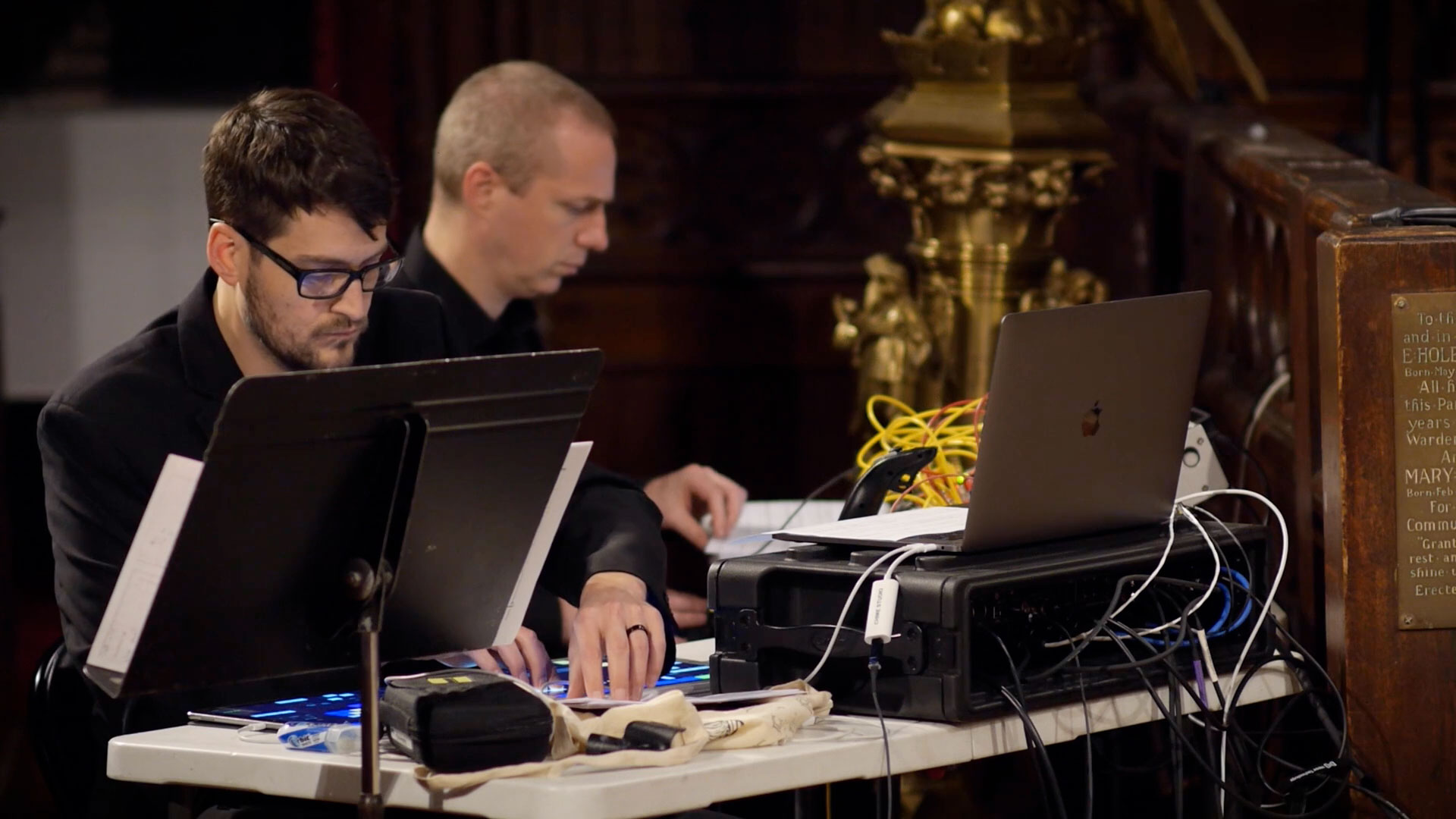 Many of the compositions I wrote between 2000–2018 utilise discrete patterns in which near and exact repetition operate in close proximity. For the listener, this calls into question notions of sameness and difference. Hume’s dictum that “repetition changes nothing in the object repeated but does change something in the mind which contemplates it” (Deleuze, 1994) became a defining aesthetic statement for me during the process of writing in this period. It illustrates how duration might be experienced as a state of perpetual ‘becoming’, through which each moment is perceived as being distinct from that which precedes it—even if, in that moment, one is hearing the same material again.

My experiments with this approach to musical perception have prompted me to explore perceptual thresholds, boundaries and states of ambiguity. I have begun to work more directly with technology to experiment with combinations of pre-recorded and live sound. Significantly, the shifting relationship between digital and live loops has offered a new perspective to my work. The mechanical reproduction of the loop through digital means makes explicit the fact that each repetition is a carbon copy of what directly precedes it, and this has raised the question of how the experience of time might be different for listeners as they perceive repetition that is digital as opposed to live.

Dead Time challenges the listener’s perception of time by juxtaposing loops of material that are performed ‘live’ and those that are heard as pre-recorded ‘virtual’ loops. Drawing upon Lisa Baraitser’s Enduring Time (2017), and in particular, her notions of delaying, waiting, repeating, and persisting, I have begun to question my previously held ideas about perpetual ‘becoming’ by questioning what constitutes ‘sameness’ and, by extension, how listening in the present might also involve imagining the past.

in memory of Erik Oña, whose ideas and energy have influenced so many of us.

A crowd in a frantic city, stopping at a red light: an ephemeral sense of cohesion, of synchronous endeavours, fleeting, fragile. Then, the richness of its disintegration when the light turns green, a blooming of trajectories: the beautiful complexity of the noise of all things busy, unfolding, unwoven. At this very moment, time feels elastic, and what appears at first together, when observed attentively, reveals great beauty in the complex dislocation that follows immediately.

I would like to thank the following people, without whom this piece would have not been what it is: the Wet Ink musicians, for their talent and generosity, with a special nod to Sam, for the many years of enriching discussions; Owen Green, Gerard Roma, and Alex Harker, for the creative coding environment where ideas can fly, high and low; Will Bedford, for his extensive piano samples; and Ben Hackbarth, for his inspiring AudioGuide software.

Commissioned by Wet Ink with the financial support of the Canada Council for the Arts, CeReNeM, and the FluCoMa project (European Union’s Horizon 2020 research and innovation programme, grant #725899).

A Mere Echo of Aristoxenus is a set of two pieces based on the ancient accounts of aural architecture and the acoustic reconstructions of two lost sites. This is part of my ongoing research in sound and music archaeology that includes 1. the measurement and acoustic reconstructions of ancient sites and instruments, 2. textual descriptions of past listening experiences, 3. performing field work and measurements on intact acoustic sites, and 4. researching methods of presenting and exhibiting past acoustics. This work explores the acoustic sense of a large Greco-Roman amphitheatre with ‘sounding vessels’, as described by Vitruvius, and the Echo Stoa in the Olympic Sanctuary in Marathon, Greece.

Ghost Aulos for Vitruvius is based on ‘sounding vessels’ and a timbral analysis of a reconstructed Aulos (an ancient Greek reed instrument). Sounding vessels were bronze resonators used by the ancient Greeks to enhance the sonic experience of an amphitheatre. I built 3D virtual models of these vessels and placed them in a virtual convolution-reverb spatial representation of a large amphitheater. Much of Ghost Aulos for Vitruvius was created by orchestrating the sounds of these virtually reconstructed sounding vessels in the 3D model of the amphitheater.

Heptaechon was composed based on the acoustics of the Echo Stoa, a large colonnade described by Pausanias in the 2nd c. CE in his Description of Greece. He said that a word spoken there would echo seven times or more. I built a 3D model of the Echo Stoa structure based on the text and archaeological site plans and rendered an auralisation of the acoustics at various locations. My intent in this piece was to examine this site’s peculiar echoing behaviour and to compare an ancient account of sound with modern notions of echo.

Both works are interesting case studies for a number of reasons. In the case of the sounding vessels, some acoustic experts do not believe Vitruvius’ account and claim that the vessels would have been physically impossible. I do not make a claim about the physical possibility of such a site, but I was curious to hear how the vessels were imagined to function by Vitruvius and his contemporaries. I created the timbre of a ‘ghost aulos’ from the violin, saxophone, and flute. The intonation is derived from a reconstructed ‘Louvre aulos’.

In the Echo Stoa, my reconstruction seemed to confirm the claim of “seven or more” echoes from almost every perspective. I composed the material in the Echo Stoa to bring out the echoes of the space using the timbre of contemporary sounds (a Roman gong and chime). I also used the sounding vessels in this movement. In this instance, the vessels linger far above the Echo Stoa and ring like the ‘music of the spheres’.

Lines on Black was written for the septet formation of Wet Ink Ensemble. This work explores gradations of notation and the grey area between notation and improvisation. I use gradations of notation in this piece as a vessel to engage the personalities of the individual performers in the Wet Ink band. Some movements are completely notated, taking advantage of the precision that these players can engage in. Other movements are completely improvised, allowing these creative musicians to spontaneously invent sound within a reference point of the rest of the piece. Some movements fall in between, allowing a certain level of freedom within an algorithmic structure.

modules/relationships has no definitive structure or order of play, and invites Wet Ink to shuffle it at will. The piece was written to showcase the fluidity of Wet Ink – it should send you off without any doubt of their ability to imagine themselves into any musical scenario.

The essence of Smoke, Airs is suggestion—the material is made up of whistles, whispers, sandpaper, textual sensations and vocal utterances, all coalescing, as if moving through the rooms of an empty house. The sound world is inspired by my improvisational language, and written for the ensemble to play freely in and give life to. The piece was composed with love for the Wet Ink Ensemble, completed in October 2019.