Interactive Aural Analysis has been developed by Michael Clarke as a new approach to studying electroacoustic music.  This approach uses software to emphasise the aural and allow interactive engagement with music and the techniques used to produce it.  This is especially important in a repertoire that often does not have a written trace (in the form of score) and in which the techniques are less commonly understood.  For example, analytical charts are presented on screen with buttons enabling the reader to hear the sounds.  Reductive sketches are produced aurally and interactive exercises enable readers to recreate the techniques used by the composer and experiment with them.

The first Interactive Aural Analysis (IAA) was an analysis of Jonathan Harvey’s Mortuos Plango, Vivos Voco with software accompanied by a chapter in the book Analytical Methods of Electroacoustic Music edited by Mary Simoni (Routledge, 2006).  The latest version of the software can be downloaded here.

An IAA of Denis Smalley’s Wind Chimes can be downloaded from the GRM website.  This is accompanied by tutorial videos on how to use the software.  Again the software is intended to be used alongside a written text, a chapter in the book “Denis Smalley” in the series Portraits Polychrome (number 15) published by ina-GRM (2010).  French editions of both the book and the software are due out shortly.

An IAA of Boulez’s Anthèmes 2 (violin and live electronics) is due out later this year from IRCAM.  The analysis will again comprise and extended written text together with software.  The software also facilitates a comparison of the structures of Anthèmes 2 and the earlier Anthèmes for solo violin.

Other related work includes a joint project with Professor Peter Manning (Durham University) examining this studio practice of Stockhausen and the relation between technology and the composer’s creative goals, especially related to Oktophonie.  A joint paper in Organised Sound was followed by a paper at the 2008 ICMC in which software was used to emulate Stockhausen’s approach to spatialisation. 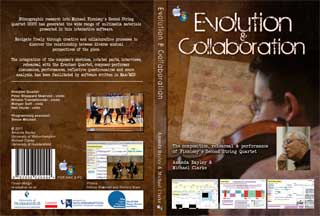 In another collaboration, with Prof Amanda Bayley of Bath Spa University, (formerly of  Wolverhampton University), software was used to present an analysis and ethnographical study of Michael Finnissy’s Second String Quartet.  This study is on a DVD published by Palatine.

For more information on this project and to order a copy of the DVD click here.

Articles on the background to IAA and the ideas behind can be found as follows: 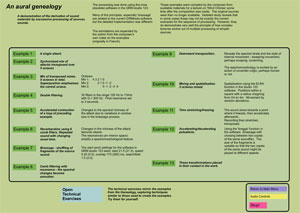 “An Interactive Aural Approach to the Analysis of Computer Music”, in Proceedings of the International Computer Music Conference, San Francisco, 2005, 85-8.

An extended account of IAA can be found here: