Studies by UoH since 2003 have identified deforestation as a major problem in southwest Ethiopia. Forest loss occurs as people seek to improve livelihoods through agriculture rather than forest-based enterprises. Other drivers of forest loss include the lack of tenure security over forest and income from it. Additional problems include investors’ claims to forest, population growth, in-migration, cultural change and urban demands. These will increase given recent completion of a tarmac road through this area connecting Ethiopia to South Sudan.

Between 2010-2016, UoH and partners implemented a project in the same four districts to improve forest tenure and income (see WCC-PFM Project). Its focus was developing Participatory Forest Management (PFM) Agreements between communities and local government, providing secure forest access for communities and establishing their Forest Management Groups (FMGs) to manage and protect the forest. An external assessment found annual rates of deforestation were reduced to 0.18% in community-managed forests compared to 2.6% in forests with no community management.

In some areas, communities generate income from forest-coffee sold through cooperatives which adds value to maintaining the forest. However, such forest-coffee primarily benefits men and is only found in 25% of 100,000ha of the community managed forest. The remaining areas benefit from other Non-Timber Forest Products (NTFPs), including honey, cardamom, chillies, forest fruits, long pepper and forest mahogany seeds. These are variously harvested by men and women for domestic use and limited local sale. Studies in 2015 identified how to add value to these NTFPs and sell them to national and international buyers. The NTFP-ME project is building on the success of the 2010-2016 forest-coffee work by developing value chains for some of these NTFPs, thereby diversifying the sources of forest-related income. The new activities in harvesting NTFPs and marketing them is engaging women more through the establishment of women-dominated Micro-Enterprises (ME) and increasing their representation in the marketing cooperatives to which the MEs are linked. These efforts are making the forest a more attractive land use for the communities, while the power of the FMGs is being strengthened through Communal Land Certificates (CLCs) which provide stronger legal rights to PFM forest.

The project is being implemented in four districts (woredas) in Bench-Sheko and Sheka Zones of Southern Nations, Nationalities and Peoples Regional State (SNNPRS) (Figure 1). 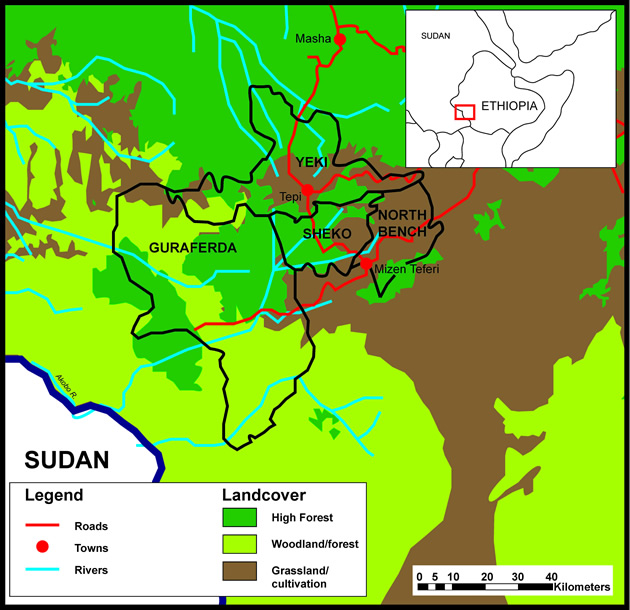